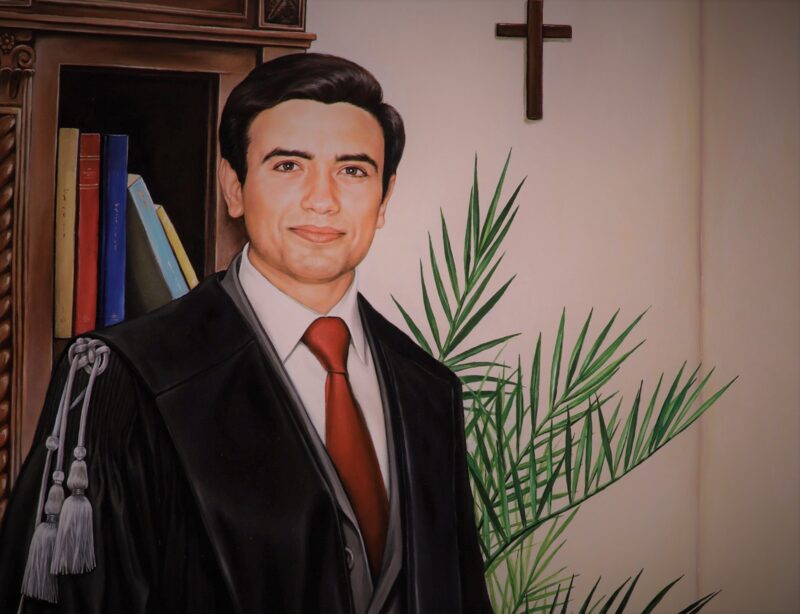 One of Pope John Paul II’s most impressive speeches  was in Agrigento, Sicily when on May 9, 1993 he categorically condemned the mafia and all associations related to the mafia. He described the Sicilians as a people who love and cherish life and who, therefore, cannot live in the shadow of an organization that promotes the culture of death. Turning to those in charge, he called for repentance: “One day God’s judgment will come.” On the 25th anniversary of this speech, Pope Francis described this as a prophetic gesture. Pope Benedict XVI has followed in the footsteps of John Paul II and on a visit to Calabria – the heart of the ‘Ndrangheta’ – accused this criminal organization of stifling the fabric of society.

We need to look at these statements in the light of broader work by lay people and anti-mafia priests. For example, Don Pino Puglisi, today Blessed, was instrumental in helping the Church understand this problem. When the Archbishop of Palermo, Cardinal Ernesto Ruffini, showed some indifference to the Mafia problem, Puglisi was not afraid to make the necessary criticism. Apart from that, he worked to offer a safe space for young people who would otherwise be recruited by the mafia. Puglisi was killed in September 1993. Pope Benedict XVI acknowledged that he was killed in odium fidei. He was beatified on May 25, 2013.

Rosario Livatino is another mafia martyr who will be beatified. Livatino was a layman; a 37-year-old magistrate at the Agrigento Court. He was traveling to Agrigento without an escort and was killed by the mafia in September 1990. Livatino was known for his anti-corruption work and managed to seize large sums of money and other property assets that were in the hands of high-ranking people within the mafia. His murder had been ordered after Livatino refused to abide by the mafia order to stop investigating them.

Throughout his murder trial, it became clear why he should be called – and why he is – a martyr. The mafia often ridiculed him and his faith. He was called a ‘bigot’ because he took his faith seriously and regularly attended Mass. During the investigation, the prosecution also noticed that Livatino wrote the letters “s.t.d.” in all his diaries. It is understood that this stood for ‘sub tutela Dei’ – under the protection of God. This inscription gave its name to a Sicilian docu-drama about the life of Livatino.

Two popes had a particular admiration for Livatino. Following his assassination, in that famous 1993 visit, Pope John Paul II described Livatino as “a martyr of justice and, indirectly, a martyr of the faith.” The same words were quoted by Pope Francis. He described Livatino as a concrete example for those who want to do the complex work of a magistrate: “When Rosario was killed, almost no one knew who he was. He worked in a provincial court: he took care of the seizure of property of illegal origin obtained by the mafia. He did it without looking anyone in the face. “

The Pope also cites Livatino’s reflection on how to choose: “choice is the most difficult thing a human being can be called to do. That is why the decision on choice, for a believing magistrate, is part of the relationship with God. A direct relationship, because working for justice is a form of personal prayer and dedication to God. An indirect relationship, the fruit of the love shown to the person being judged. ” Livatino’s advice was that the magistrate always recognizes that he is weak so that he appears before society always ready to understand who is in front of him and to judge him “not as a superman, but in a constructive repentance way. ”

Livatino believed that justice is necessary but, on its own, it is not enough. He believed that, above all, there is the law of love that encourages a man to treat others charitably. Second, one must also recognize the reality of sin – the fact that we have all wronged ourselves and others – and so we can never judge only by our own measurements. He practiced this in his profession. Before any inquiry, he would see to shake hands with everyone – including the accused. This was a sign of courtesy and respect but, above all, rectitude. He also rebuked those who did not use the same courtesy towards anyone else. For example, there was a policeman who earned a rebuke because, after the murder of a criminal, this policeman said something against the victim while his body was still in the room: “in the face of death, those who believe pray; those who do not believe remain silent. “

Livatino’s life exemplifies the connection between faith and justice. Justice is necessary, but without considering the human element, it can take a dark turn (justice, after all, is not revenge). Faith helps man to understand that justice is never perfect and always fallible. This is something Livatino understood, without holding back from doing his duty. That the Church proposes him as a model of holiness is also a clear sign that every person, in every field, is called to heroic virtues. Livatino paid the highest price for these virtues.

André P. DeBattista is a political writer and academic in the field of political science, international relations and religion and public life.

This article appeared originally on Il-Leħen on 28 th February 2021.