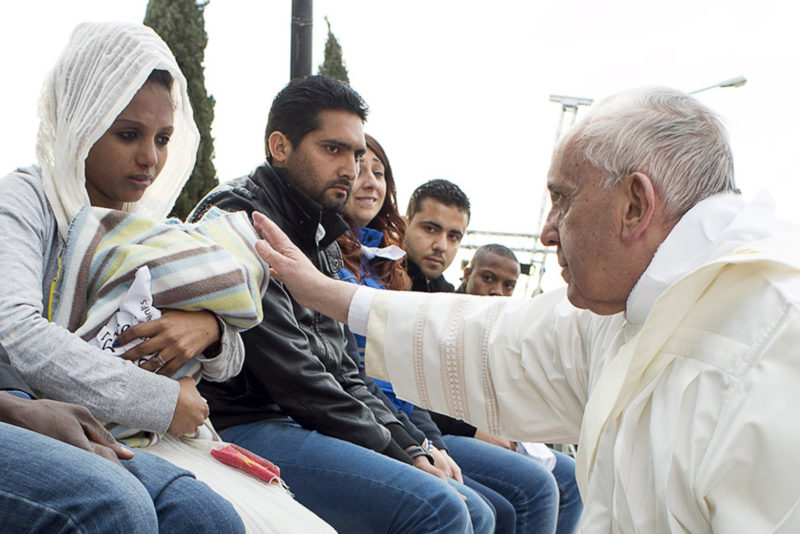 Following an increase in support for far-right movements, some of which base their arguments on the need to protect our ‘Catholic identity’ as well as recent statements by the Guardian for Future Generations, who justified his call to exclude migrants and Muslims in particular by invoking his desire to live and die in a Catholic country,[1] the Justice and Peace Commission of the Archdiocese of Malta feels the need to speak out on our duty as Catholics to resist politics of hate and exclusion.Across the globe, various forms of politics of exclusion are increasingly taking root. Whether in appeals to fears and anxieties about rapid cultural and demographic changes or more open nationalistic and Islamophobic rhetoric, the pattern of confrontational nationalism that represents the outsider as a social, economic and religious menace is common throughout. Unfortunately, Malta has not been immune to these dangerous influences which are tearing societies apart.This increasingly powerful narrative has no philosophical or theological basis in Christian tradition.  On the contrary, Christian tradition helps shape a counter-narrative based on solidarity and hospitality as well as on our common humanity and dignity.Moreover, the principle of the common good, as formulated in Catholic social teaching, fundamentally challenges a culture that prioritises personal interest over solidarity with the weak and marginalised, or narrow national interest over global concern. Whilst it might be tempting to believe that ‘good fences make good neighbours’, history teaches us that “those who build walls will become prisoners of the walls they put up”.[2]In recent years, Pope Francis has been offering an ongoing witness of what it means to be Catholic and foster, in words and deeds, a culture of encounter and solidarity that counters a culture of fear and exclusion. From his visit to Lampedusa, to travelling back to the Vatican with a group of asylum-seekers from Lesbos, to the washing of the feet of a group of Muslim men and women, he has led by example.Indeed as expressed in the document on Human Fraternity for World Peace and Living Together presented by the Pope and the Grand Imam of Al-Azhar, last February in Abu Dhabi: “Faith leads a believer to see in the other a brother or sister to be supported and loved. Through faith in God, who has created the universe, creatures and all human beings (equal on account of his mercy), believers are called to express this human fraternity by safeguarding creation and the entire universe and supporting all persons, especially the poorest and those most in need”.[3]Addressing a Plenary Session of the Pontifical Academy of Sciences, Pope Francis recently declared that migrants are not a threat to the culture, customs and values of a receiving nation. “The Church has always encouraged love of one’s people, of country … At the same time, the Church has admonished individuals, peoples and governments regarding deviations from this attachment when focused on exclusion and hatred of others, when it becomes hostile, wall-building nationalism, or even racism or anti-Semitism. The Church observes with concern the re-emergence, somewhat throughout the world, of aggressive tendencies toward foreigners, types of migrants, as well as that growing nationalism that disregards the common good”.[4]He reminded participants that the duty of Christians towards migrants can be articulated around four verbs: welcome, protect, promote and integrate. In particular, and contrary to an all too common understanding of the last verb, “integrating does not mean assimilating, but sharing the way of life of their new homeland, while they themselves remain as individuals, with their own biographical history. In this way, migrants can present themselves and be recognised as an opportunity to enrich the people that integrates them”.[5]Our times call—with great urgency—for a bold defence of our Catholic identity, an identity lived out in creative, faithful and hopeful resistance. It is an identity rooted in love. It is the only true mark of a good Christian. “By this everyone will know that you are my disciples, if you have love for one another” (Jn 13:35). It is up to us to resist the prevailing narrative of exclusion and fear, and instead imagine and usher in a future built on justice, love, solidarity and openness. Trying to build a national identity—let alone a Catholic identity—on fear, exclusion and hatred, is not only a vile betrayal of the Gospel, but also the surest way of following the path of the foolish man, “who built his house on the sand. The rain came down, the floods came, and the winds blew, and beat on that house; and it fell, and great was its fall” (Mt 7, 24–27).[1] Guardian for Future Generations sees threat to ‘Malta of the Maltese’:https://www.timesofmalta.com/articles/view/20190526/local/guardian-for-future-generations-launches-anti-muslim-tirade.710971[2] ‘Those who build walls become prisoners’. The Pontiff’s conversation with journalists on his return flight from Morocco: http://www.osservatoreromano.va/vaticanresources/pdf/ING_2019_014_0504.pdf[3] A Document on Human Fraternity for Wold Peace and Living Together:http://w2.vatican.va/content/francesco/en/travels/2019/outside/documents/papa-francesco_20190204_documento-fratellanza-umana.html[4] Address of His Holiness Pope Francis to participants in the plenary session of the Pontifical Academy of Sciences: http://w2.vatican.va/content/francesco/en/speeches/2019/may/documents/papa-francesco_20190502_plenaria-scienze-sociali.html[5] Ibid.