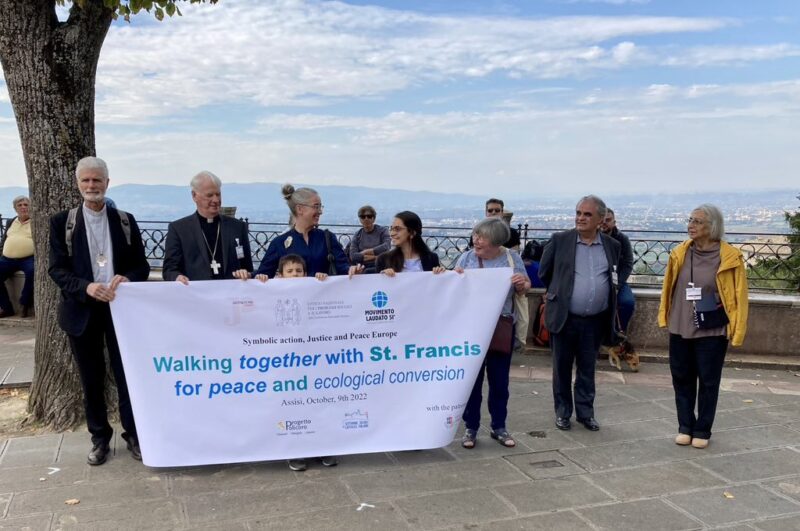 Following this moment of prayer, which took place in the Brother Elia chapel within the Sacred Convent of Assisi, Bishop Noel Treanor of Down and Connor, President of Justice and Peace Europe, greeted the more than sixty delegates and guests coming from more than twenty countries to discuss Peace, Integral Ecology and Synodality. He noted that this year’s meeting took place in the context of the ongoing war in Ukraine and especially welcomed the delegate coming from this country’s Justice and Peace Commission.

In her address, the mayor of Assisi Stefania Proietti, highlighted the spirit of Assisi as the city of peace, hospitality and the righteous. She recalled the risk taken by the citizens of her city during the Second World War to save hundreds of Jews and also remembered the visit of Saint Pope John XXIII before the opening of the Second Vatican Council. Archbishop Luigi Renna of Catania, President of the Italian Justice and Peace Commission, highlighted the 60th anniversary, this month, of the opening of the Council, which first restored the idea of Synodality in the Catholic Church.

In his keynote address, Fr Giacamo Costa sj, member of the coordination committee of the current Synod, explained that Synodality and integral ecology are two aspects of the same vision outlined in the apostolic Exhortation, Evangelii Gaudium. Both these concepts are called to fertilize each other in a context of globalization which is leading to an increase in fragmentation and isolation, he pointed out. In this vision of the Church proposed by Pope Francis, the synodal method and style have to permeate the Church in its structures and its mission.

On Saturday, the 8th of October, the delegates visited Rondine – the Citadel of Peace. The founder of the community, Franco Vaccari, introduced the method of Rondine, which consists in bringing together young people from communities at war with each other. This experience often leads them to engage in justice and peace issues when they return to their home countries. Franco Vaccari concluded saying that “friendship opens us to the future and that the poor and young people are the victims of the failure of politics which leads to war”. Participants noted with interest the planned extension of the Rondine school project to other European and Mediterranean countries.

In the afternoon, four workshops were led in the synodal style by young people. Participants started with the sharing of experiences and then explored different dimensions of peace in its relationship to the economy, energy transition, ecological conversion and work. Although the challenges identified are objectively daunting, best practices from different parts of Europe showed that meaningful action can be taken at local level without ignoring the need for structural changes at the national and international level, which are required to reach, for example, the goals set by the European Union “Fit for 55” package of measures.

Inspired by the synodal moment that animated the workshops in Rondine, and following the repeated appeals of Pope Francis, a main theme of the International Workshop emerged as the need to listen, and to listen in a humble and engaged way that allows for true understanding and dialogue. This relates to a central message conveyed by the Rondine method, namely the need for an internal, relational and dialogical process that requires each of us to confront both the enemy without and the enemy within.

Sunday Eucharist in the Shrine of Renunciation was followed by a symbolic action. Delegates walked in the footsteps of Saint Francis from the Room of the Renunciation to the Chapel of San Damiano to meditate and pray for peace and for ecological conversion.

The location of Assisi led the delegates to focus their energies towards two overall themes so central to the history of this city and to Catholic social teaching: the question of peace and the question of ecological conversion.

In light of the enriching experiences that touched upon these two themes, Justice and Peace of Europe confirms its commitment to the Catholic teaching on peace and care for creation but also the urgent need to translate those teachings into action, at the local, national and global levels. This must be done to prevent further militarization and escalation of war and to halt the ongoing destruction of our common home, indeed in the footsteps of Saint Francis.

In these times of war in Ukraine, Justice and Peace Europe noted the just cause of self-defence but also the importance of not letting legitimate defence lead into revengeful action.

The General Assembly, which followed the International Workshop, was attended in part by Cardinal Michael Czerny sj, Prefect of the Dicastery for the Promotion of Integral Human Development.