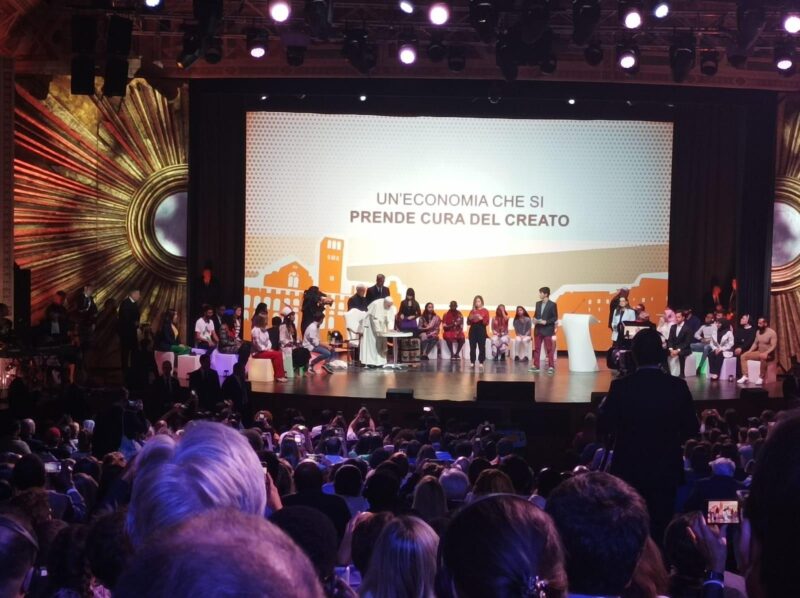 “You are called to become artisans and builders of our common home, a common home that is falling into ruin”. These words of Pope Francis still resounding in the ears of the young economists, entrepreneurs and changemakers who gathered in Assisi from the 22nd till the 24th of September to participate in the world event “Economy of Francesco” (EoF).

More than 1000 participants from more than 100 countries joined this event, initially planned to be held in March 2020 and then held online in November 2020 and October 2021. During these years even more people became part of this process to promote and a new economy and prove that it is possible. The first day of the event, titled the “Harvest” was an opportunity to share ideas, good practices and to kick off discussions through the voice of the participants coming from different countries. Another key moment was EoF Hogar (“Home”), which consisted of informal presentations of entrepreneurial and academic projects from different countries, whilst leaving time to build relationships. In fact, a new economy requires a focus on relationships and during these days and especially in the EoF Hogar we had a first hand experience of what this means.

The second day was dedicated to the “Ideas” that participants shared in the “villages”, which consist of thematic focus groups which tackle different aspects of EoF. However, before working in the villages, we were invited to discover and be inspired by the spirituality of Assisi, by visiting the places where St Francis and St Claire lived. The proposals and ideas put forward by participants within the “villages” were linked to subjects as varied as: Business and Peace, Vocation and Profit, Finance and Humanity, Agriculture and Justice, Business in Transition, CO2 Inequality, Energy and Poverty, Women for Economy, Life and Lifestyle, Work and Care, Policies for Happiness, Management and Gift.

In my “village” which focused on “Finance and Humanity”, I had the opportunity of promoting the profile of Blessed Giuseppe Toniolo, one of the economists who studied the relationship between economics and ethics. At the end of proceedings, participants of the Economy of Francesco agreed on a Pact which was presented to Pope Francis during the last day of the event. This pact in 12 points binds the participants together with Pope Francis to work towards an economy that is guided by ethics, promotes the cultures and traditions of peoples, fights poverty and generates wealth for everyone. This new economy which the world requires is one that cares of the creation and does not leave anyone behind, an economy of peace and not of war.