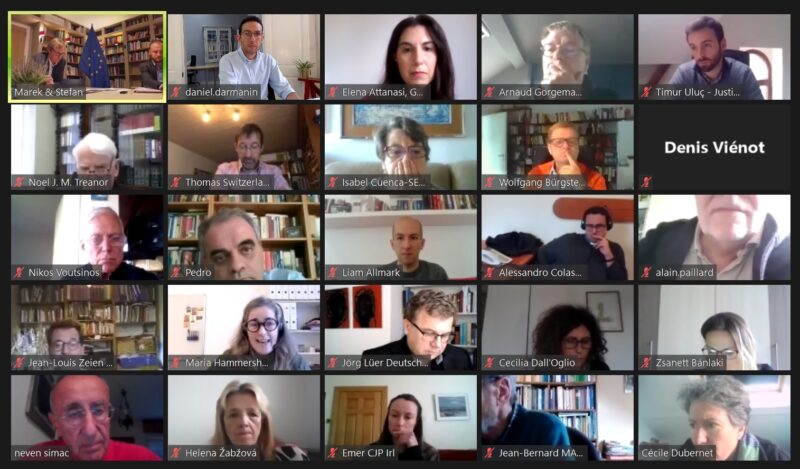 The Conference of European Justice and Peace Commissions (Justice and Peace Europe) held its annual International Workshop and General Assembly between the 10th and 12th October in an online format. Fifty participants from over twenty different countries and commissions were involved. The Maltese Commission was represented by Daniel Darmanin who also sits on the executive committee of JP Europe. Fr. Carlo Calleja also took part in the international workshop. The theme of the International Workshop this year was Religion and Society in times of Covid-19.

The international workshop took the form of a series of webinars. In the first webinar, Herman van Rompuy, former President of the European Council, Paulo Rangel and Damian Boeselager, both members of the European Parliament gave their Perspectives on the Conference on the Future of Europe in times of Covid-19.

In the second webinar which was moderated by Daniel Darmanin, Alexander Filipovic and Youssef Kamal El Hage discussed the challenges to dialogue in religion and society.

The final webinar of the International Workshop took place on Sunday 11 October with the 2020 Justice and Peace Europe lecture, which was delivered this year by Flaminia Giovanelli, the former under-secretary of the Dicastery for Promoting Integral Human Development. She drew on her experience of more than four decades of service for the Pontifical Council for Justice and Peace to underline the inseparable connection between justice and peace. The COVID-19 pandemic had shown that health, especially with regard to infectious diseases, is a global common good. Not taking it into account accordingly not only leads to many injustices but also endangers world peace.

At their general assembly on Monday in the light of the discussions of the International Workshop, the delegates of Justice and Peace Europe discussed the varied work of the commissions and chose “The Future of Europe and the European Union – a call for dialogue as a key to just transition” as the theme for the Justice and Peace Europe Common Concerted Action 2021.