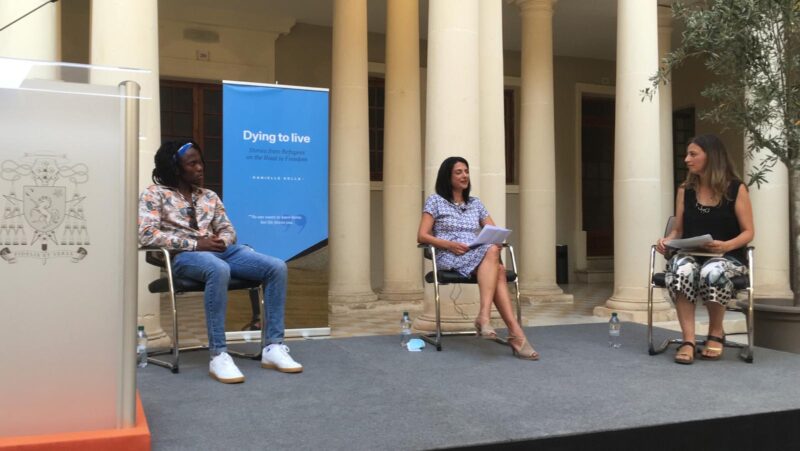 “No one wants to leave home, but life forces you.” These were the poignant words by one of the refugees whose experience features in the book ‘Dying to Live’ by Danielle Vella, journalist and director of the International Reconciliation Program for the Jesuit Refugee Service (JRS). The book was launched during an event hosted by Archbishop Charles Scicluna at the Curia in Floriana, during which the author herself as well Daniel Jude Okoeguale, an asylum seeker residing in Malta, were interviewed.

The book captures the experiences of men, women and children who had no other option but to leave their country in order to survive. It includes stories of conflict, oppression and torture during precarious journeys, as well as the exhaustion and at times despair as a result of living in limbo and not knowing what the future or even the next hour holds.

Whilst addressing the book launch, Archbishop Charles Scicluna described the stories of refugees as gripping but also very moving. He emphasised the responsibility of saving lives at sea according to international law, of seeking concrete solidarity from Europe, and of rethinking our engagement with Libya on migration.

Archbishop Scicluna thanked Danielle Vella for the opportunity she offered through this book to ask important questions which, he said, do not have easy answers: “Are we doing the right thing? Do we treat refugees in the right way? Do we have the right policy?” He appealed to authorities to revisit detention centres and the way in which we receive asylum seekers, to ensure we give hope to our brothers and sisters who have the right to live in humane conditions.

The Archbishop said he was struck by reading the experiences of refugees who suffered because of “man’s inhumanity to man”. In these experiences, he said, one can see the gaping wounds of Jesus Christ.

The narratives featured in the book ‘Dying to Live – Stories from refugees on the road to freedom’ are the fruit of interviews carried out by the author in several countries in Eastern Africa, the Middle East, Europe and the United States.

“Each refugee story is unique – the events leading up to the fateful decision to leave everything and what happened next are never the same,” explained Danielle Vella. She said that this publication also provided refugees the opportunity to set the record straight by having them tell their own stories without being the victims of labelling and prejudice by others.

Daniel Jude Okoeguale, a Nigerian national and aspiring artist, shared his experience during the event and recalled the hurdles and suffering he faced until he arrived in Malta. He recalled how when in Sabha, Libya, migrants who did not pay the smugglers were locked up and tortured. “I was lucky enough not to be among them, but the civil war in Libya at that time made me wish I’d never left home. Flying bullets became my constant companions,” Okoeguale said. At the event, guests were given a bookmark with a painting drawn by Daniel Jude Okoeguale while in detention.

In his concluding remarks, Justice & Peace Commission President Daniel Darmanin said that “we cannot look the other way, in the face of such stories. We have a duty to tell these stories, because only by facing the truth can we bring justice and peace to the world”.

The book launch was organised by the Justice and Peace Commission, the Jesuit Refugee Service (JRS) and the Migrants Commission. The event drew attention not only to the physical and mental anguish that refugees experience but also the remarkable resilience they display in their search for a dignified life.

‘Dying to Live’ is published by Rowman and Littlefield and is available from major online retailers such as Amazon and Book Depository. Copies of the book are also available at the Archbishop’s Curia in Floriana.