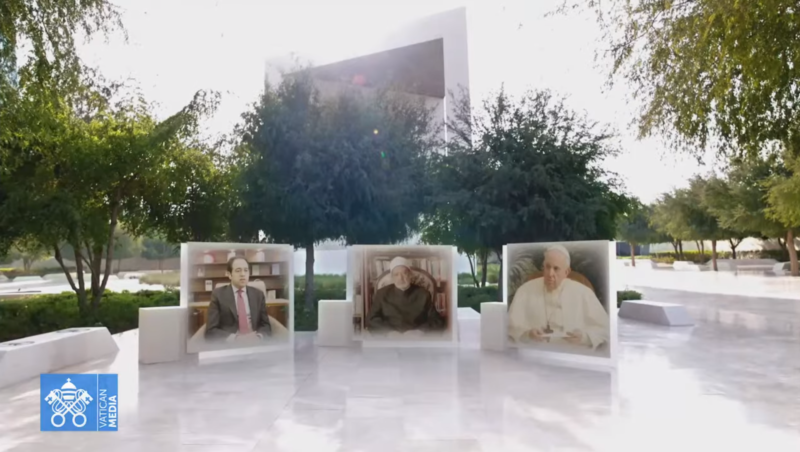 On World Day of Human Fraternity (4th of February), Pope Francis joined Grand Imam of Al Azhar – Ahmad Al-Tayyeb on a virtual event hosted in Abu Dhabi. This event marked the culmination of a joint effort by the Pope and the Grand Imam to foster fraternity, solidarity, respect and mutual understanding between people of different beliefs.

According to Cardinal Miguel Ángel Ayuso Guixot MCCJ, president of the Pontifical Council for Interreligious Dialogue, “This celebration responds to a clear call that Pope Francis has been making to all humanity to build a present of peace in the encounter with the other.”

Pope Francis has also encouraged the Holy See to join in the celebration of International Human Fraternity Day under the leadership of the Pontifical Council for Interreligious Dialogue. This Vatican institution was founded in 1964 by Pope Paul VI with the aim of working on relations and dialogue between the Catholic Church and the faithful of other religions.

During the event Pope Francis spoke of the need of an awareness of our common human fraternity as a basic step for world peace. He insisted on fraternity as open arms towards the other. Fraternity doesn’t mean a renunciation of one’s own principles and beliefs, yet these should not hinder us from seeing the other as a brother.

This event can be better understood in light of two documents which were published recently. The first is the encyclical ‘Fratelli Tutti’ which focused on fraternity and social friendship. In it, the Pope presented statements of kindness and solidarity to build a better, more just and peaceful world, with the contribution of all: people and institutions.

The other document which can shed more light is the ‘Document on Human Fraternity for World Peace and Living Together’. The Pope and the Grand Imam spent almost half a year drafting this Document before announcing it together during an apostolic visit the Pope made to the United Arab Emirate on the 4th of February 2019.

Whilst many times we focus on the differences between us, this day serves as a reminder of that common factor which unites us all – our humanity. May this day urge us to foster an environment of fraternity with the people we meet on a day-to-day basis, especially with those who have different religious or political beliefs or are of a different ethnicity or skin colour.