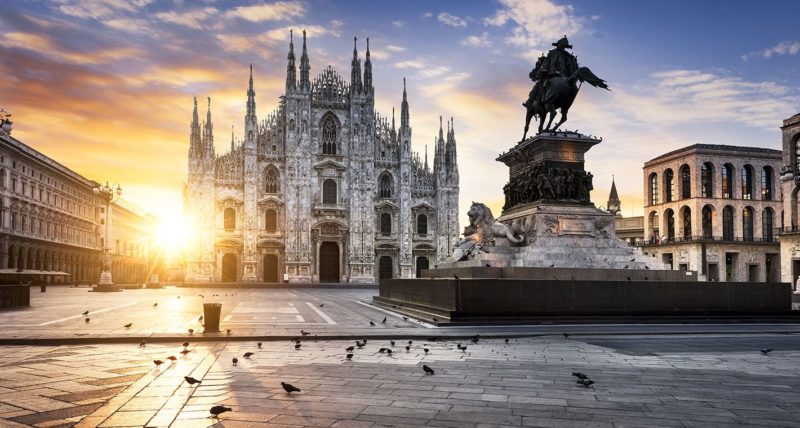 Read this reflection by Fr Joseph Hili currently living in Milan, which is one of the worst hit cities by the coronavirus epidemic in Italy. Inspired by Pope Francis’s words that “Everything is in relationship, everything is connected”, he makes us realise and appreciate the importance of our mundane tasks, whilst asking what is really important in our daily lives.

In these unique times we are living in, I think everyone has their own method of updating themselves on the current situation. The number of those infected is always increasing, the growing number of deaths frightens us. What began in China at the beginning of 2020 was seen by us as something far, something that does not concern us. One month ago, the West wasn’t aware of the consequences a virus originating in China would have on the lifestyle of all – it seems we were in a continuous denial. What this virus taught me once again, if further proof was needed, is that what Pope Francis continually repeats in the encyclical Laudato Sì (2015),“Everything is in relationship, everything is connected,” is real. What finds its origins in a relatively small city in one part of the world is now affecting all of it.

In this document, Francis attributes the root of our ecological and social crisis to the “dominant technocratic paradigm” (L.S. 101). “Politics must not be subject to the economy, nor should the economy be subject to the dictates of an efficiency-driven paradigm of technocracy” (L.S. 189), he says. I think that this phenomenon is putting in front of us some choices: between health and the economy, between life and death, between GDP figures & personal wellbeing. We must admit that most decisions taken by the majority of governments favour life and put into practice what Francis said; apart from the United Kingdom’s herd immunity plan, spearheaded by Prime Minister Boris Johnson. In my opinion, and resounding the opinions of other experts in this area, the herd immunity theory is – simply put – very scary. Ethically, I consider it unacceptable and cynical. If implemented, economically, it will generate a boomerang effect; politically, a suicide. We are interconnected and, considering that even Trump accepts the policy of containment, I really don’t understand Johnson’s choice. Or rather, I think the decision only comes from short-sighted business logic (for as long as this will last), also as a result of the Brexit choice.

The lesson of these weeks is that we remain vulnerable. In an interconnected world based on mobility and global exchanges, the infection from a virus such as Covid-19 deeply affects the functioning of the “system”.

The Coronavirus first of all shows the fragility of life. The great scientific discoveries, the “Industry 4.0”, with its artificial intelligence and ever more sophisticated medicine, deluded us about the strength of humanity. Someone has been dragged by an optimism about the unstoppable future, like a current of water that carries every piece of wood it encounters. Instead, a new and distant virus, microscopic in nature, has brought an entire planet to its knees. We are fragile, especially in front of the unexpected that always takes us by surprise and requests time to be addressed with the right rationality.

In contrast to other dangers, this virus can come from every person I come in contact with: the other, the “ally”, suddenly transforms into a possible carrier of “problems” – the virus. We, who have always supported the strength of ties and who even theorized that relationships constitute us, are faced with the great effort of rethinking the social bond at the time of the coronavirus.

It is not easy for anyone to become aware of the fact that the only precautionary principle in order not to spread this virus, is to keep minimal contacts between persons. In an instant, the working sector entered serious difficulty. Shops, restaurants, hotels, taxis, airlines, companies, churches, schools, universities, and many others had to deal with something that generates great uncertainty, exacerbated by the fact that we do not know the duration of this phenomenon.

How long will we have to live like this? And once it’s gone, how will we get out? Some say that the post-Coronavirus society will look different. Bewilderment and confusion are reinforced by the invisibility of the transmission. You don’t see, you don’t hear, you don’t touch, you don’t smell, you don’t taste anything in particular. It is something that spreads without being perceived. Those infected must undergo a medical history to understand how they could have become positive for the virus and to report and notify the people who could potentially have contracted it. Some try to find courage in the fact that the victims of the virus are the elderly and the fragile, but it is actually this affirmation that has to put us in crisis: as Francis says in Laudato Sì, our utmost attention must be given to the poor and the fragile.

For me, this moment is strange. Even the language changes in an instant and the word “positive” immediately acquires a negative meaning. “He/She was found positive” is news that immediately generates alarm among those who knew the person involved. Suddenly, everyone talks about the virus and a handful of hygiene rules that have always been recommended, such as washing hands. These can become rituals, lived in an almost manic way.

I think this moment can also help us rethink our daily lives. When everything has passed and we can go back to “normal” we will have to recognise that in the world there are people who cannot move freely, embrace each other and be together in the open air. The Coronavirus is not the plague, it is not cholera, but now we are starting to put ourselves in the shoes of the people who in history have had to go through great epidemics. Perhaps we can begin to understand how lepers must have felt, crying to Jesus from a distance, desiring to be healed. I believe that living this time with due prudence is a sign of respect for the most fragile; that is those who, were they to be infected, would certainly have serious complications.

Because of this, the proposal of Integral Ecologymade by Pope Francis is of utmost importance. It pushes a dialogue among disciplines, something already seen in the specific committees that governments are forming to tackle the crisis (economy, finance, social policy, defence, infrastructure, transport, etc.), new lifestyles, and a system of projects that do not produce but generate. Producing may involve only numbers and numeric results, generating is about liberty and responsibility towards the other, something which we all desire.

We can get out of this situation well if we grow in humility, in becoming aware of our fragility. Furthermore, it will be essential not to lose trust, to nurture relationships, and safeguard solidarity. Fear must not lock us in and paralyze us by weakening the bond between people. If distrust grows, if controversy is continuous, we will all lose. Everyone’s creativity will be important in making others feel less alone.

Responsibility may seem like an obsolete word. It can sound rhetoric, perhaps even empty, but never as in these days can we understand that we really are all connected. And that, consequently, everyone’s behaviour can make a difference, for oneself and for others. After all, personal responsibility on a social level is the last and definitive barrier that can allow us to stop the virus, but also the first and solid condition for rebuilding our future.

Fragility, care, trust in others, solidarity and silence are the key words that Pope Francis gave us in the 2015 document. The Coronavirus is highlighting these themes as never before. Perhaps the real vaccine comes into effect when we make these terms our own.