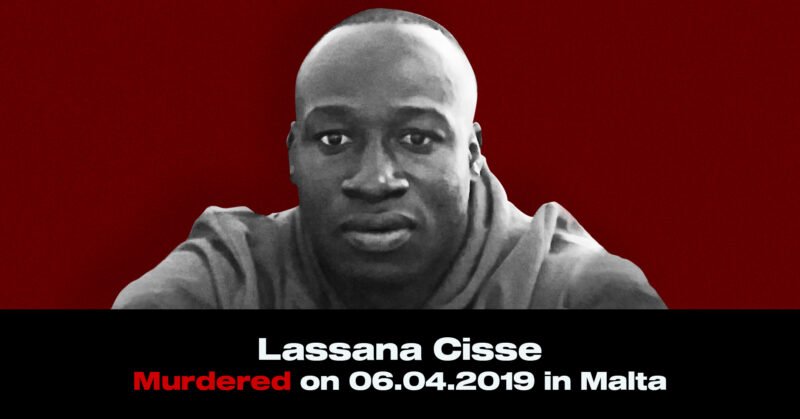 Wednesday, 6 April, 2022 is the 3rd anniversary of Lassana Cisse’s brutal murder. Such acts of violence have to be remembered, not forgotten or silenced. Several organisations are standing in front of the Law Courts today in solidarity with our sisters and brothers who continue to face violence just because they are black. The Maltese community is standing together with the black community against any form of racism and acts of violence.

This was a terrorist attack meant to instil terror in our own community. The two AFM soldiers who allegedly shot Lassana probably did so because they thought they could get away with it. Their self-conħdence was fuelled by years of political rhetoric which suggests that foreigners may be treated as inferior people.

It is of the utmost importance that we recognise Lassana’s brutal murder as the climax of the systemic and institutionalised racism which affects our society at every level, including: the courts, the military, health care services, employment, housing, and education. We are also concerned at reports of racial proħling conducted by the police. Foreigners are routinely face discrimination in most of their dealings with Maltese society.

All this does not happen in a vacuum. For far too many years, political discourse has fanned the flames of racial prejudice, while others have condoned discrimination by their silence. It is important for the Government to stress that racism and prejudice will not be tolerated.

Only then will we start seeing real change in the public and private sectors. The urgency of the problem requires Prime Minister Robert Abela to be aware of the messages his Government is disseminating. It is his responsibility to use his authority to exert positive influence and lead by example. We urge him to foster a nation where Maltese people and foreigners may live peacefully side by side, irrespective of religion, nationality and/or skin colour.

We are also appalled that, three years after his death, Lassana’s body has not yet been returned to his family in Ivory Coast. It is truly shocking that the authorities aggravate the trauma his family are experiencing by denying them the possiblity of laying Lassana’s body to rest and bidding him farewell. We strongly urge the authorities to return his body immediately and let the family get closure.